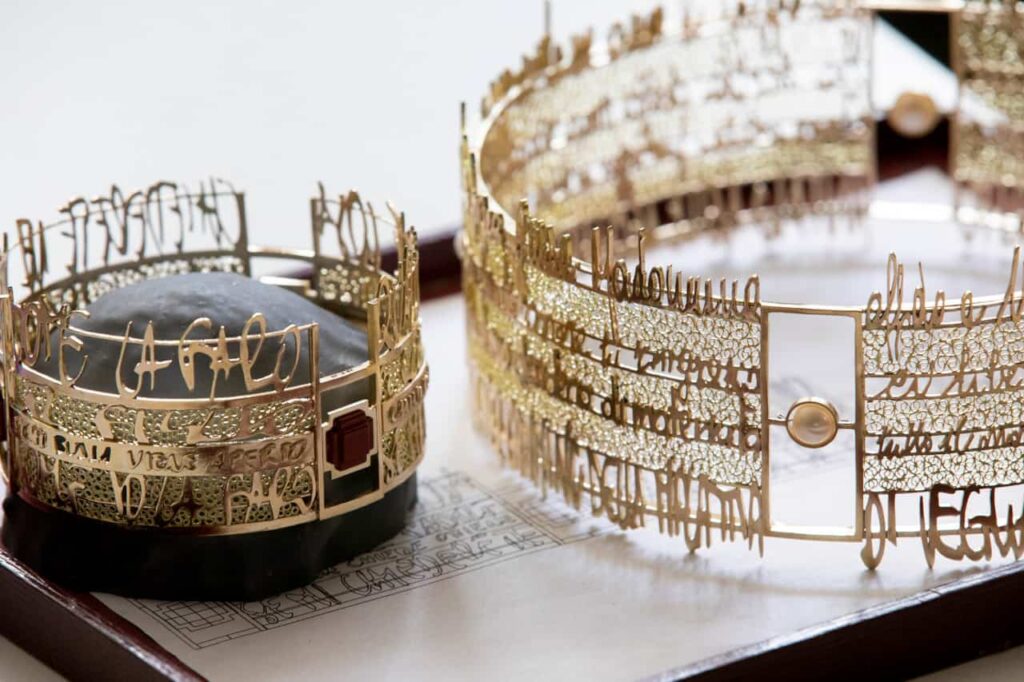 The Virgin of Oropa, says Don Paolo Boffa (Vicar General of the Diocese of Biella), is invoked with the title of Queen. And this is precisely how the venerated statue of Oropa is proposed: a Queen with a crown on her head.

The Diocese of Biella and the Oropa 2020 Committee discussed each other for a long time, reaching the conclusion that “every time has its crown”, that is, it has its own way of expressing a characteristic of trust and recognition of the particular bond that binds everyone to Sacred Image. For this reason, a competition notice was launched in 2019 to go beyond the idea that the crown is reduced exclusively to being a precious object: the coronation gesture, in fact, takes on multiple components. There is the liturgical-pastoral and evangelization element, but not only. There is also the charitable element, as well as the feminine one, attributable to everyone’s need to have a Mother to turn to. Finally, the popular element, which allows all the people to recognize themselves in a crown that feels their own, to which the cultural element is linked: in fact, the crowns become part of the heritage of history, rather than for their preciousness, for the meaning that they conceal and represent.

In the light of these reflections, with the National Office of Ecclesiastical Cultural Heritage of the Italian Episcopal Conference, the idea was born of announcing a competition of ideas for the design and construction of two “crowns” for the statue of the Virgin Mary and the Child Jesus. Responsible for this procedure was the Diocese of Biella, in collaboration with the Lay Body of Worship Sanctuary of Oropa and of course with the CEI Cultural Heritage Office. Five artists participated in the competition of ideas: with unanimous consent, the jury selected the project by Luca Cavalca, who created a gold filigree crown made by EFFE-ERRE, recalling the historical Biella textile tradition and using the skilled artisan hands of the filigree artists of Campo Ligure.

The close relationship between the Biella weaving techniques and those of filigree, in fact, creates a close relationship with the Mantle of Mercy, made with thousands of pieces of cloth donated by the people and sewn together by the skilled hands of the nuns of the Island of San Giulio .

“I wanted to represent a single thread that, from the fabric of the mantle to the gold of the crown, elevates our prayers to God” explained the artist Luca Cavalca. “I thought that the crown could represent the universal aspect of prayers and invocations that in the mantle instead have individual value, almost transfiguring a thread of fabric into a gold thread that symbolically elevates the prayers of children to the Father. These writings are graphically reworked maintaining the characteristics of the individual spellings which in their diversity unite us in a single chorus that asks Mary, entrusts herself to her, thanks her, hopes, believes … ”

«The gesture of crowning Our Lady – underlined Cardinal Re, pontifical delegate – inserts us into a tradition that has roots in 1620 and brings us back to mind the countless people who over the centuries have come to this Shrine to seek light, support and comfort “and who here” have lived the invigorating experience of a profound encounter with God. There are not a few who have come with a bitter and sad heart and whose soul has returned serene praying and singing the praises of Our Lady, confident in the power of intercession of the Mother of God and our Mother ».

EFFE-ERRE, in close collaboration with Luca Cavalca, has therefore made, entirely by hand, the golden crowns that are developed and are based on the words and prayers that the faithful address to Mary and the Child Jesus. , within the company, a profound religious sense, made up of spirituality and union in the face of the Sacred and Faith.